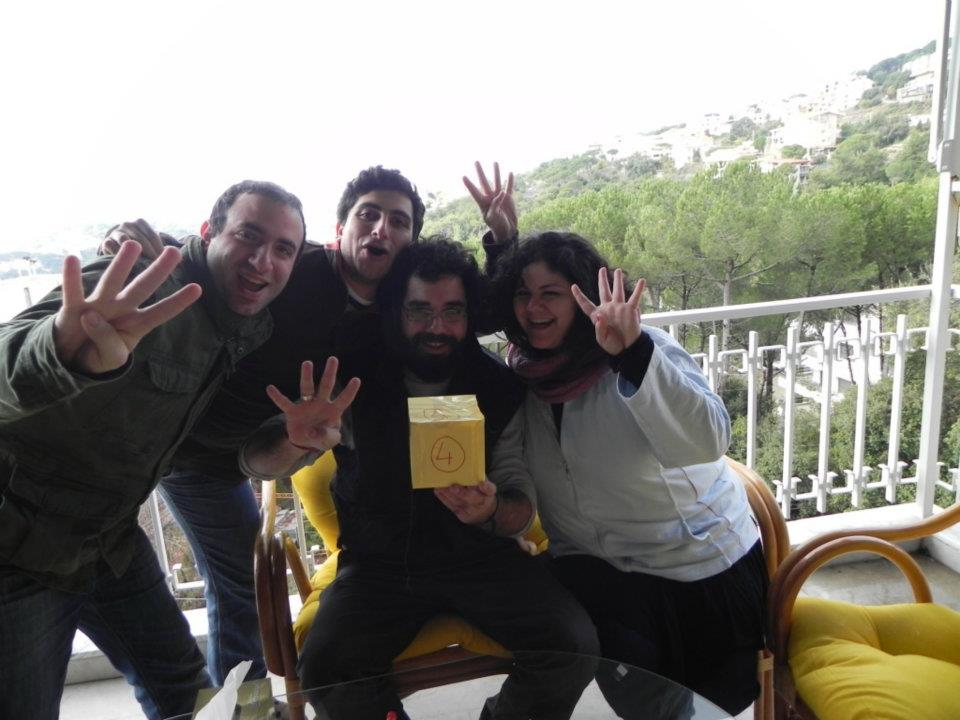 Team building is one of the most important exercises for a strong organization.  With this in mind, 18 members of DSC escaped to the quaint village of Baabdat for a long overdue team-building weekend on November 19th-20th, 2011.

The group met on Saturday evening at the DSC home office in Dekwaneh to caravan up to the mountain home of Yorgui Teyrouz where the camp took place.  Upon arrival, the attendees began getting accustomed to their new temporary home, claiming sleeping spaces and unpacking their light loads of luggage.

Shortly after getting situated, everyone gathered in the living room to participate in the first team-building game of the weekend.  Each person was given a poster board and magazines with the purpose of finding pictures that best represented the other people at the camp.  Each person wrote their name on their poster board and placed it in the middle of the room in preparation for the pictures.  The results were hilarious, intertwining prominent personal characteristics and inside jokes that were represented by the magazine clippings.  This activity was the ideal ice-breaking game which immediately created a bonding atmosphere within the group.

Shortly after the game, a dinner of meats, cheeses, and wine was served.  A variety of cheese from Brie to Labneh was available as well as salami and mortadella.  While eating, people broke off into smaller groups to socialize, joke, laugh, and bond.

After dinner, the group sat together in the living room to watch, “Remember the Titans”, a movie about race relations at a high school in Virginia where, for the first time, black and white students are forced to attend school together.  A discussion of the movie was supposed to take place after the viewing, but the movie ended late into the night and people were tired.

After breakfast the next morning, everyone was broken up into groups of four to work together on a time-constrained assignment.  Each group was given an egg, a poster board, and a piece of string to construct a protective structure to prevent the raw egg from breaking when dropped from the second story balcony.  All the projects were a success with the exception of one whose egg met its sudden demise when the box constructed to protect it was ineffective against the harsh cement.  After the game, the separate groups were brought together to discuss who they worked together to construct the project, who was an active part of the design and construction, and who did not participate.  As is usually the case in group projects, it was determined that more outgoing personalities should allow the shy and reserved members to participate in group projects as well.

The next game on the agenda was a sort of speed dating, where people were lined up in two rows facing each other and, for five minutes, had to talk about themselves, their role at DSC, and how the two parties can work together on current or future projects before switching to the next person.  This activity cultivated many new work relationships while also allowing DSC veterans to get to know people new to the organization.

The camp ended with a group discussion about the many current and future plans of DSC.  Topics ranged from the role of people who want to volunteer with DSC to the announcement of new hire call operators and an in-house graphic design person.

Overall, the camp was a huge success.  Everyone who attended felt closer to the other members of DSC, especially those who were new to the group.  We look forward to our next team-building camp which promises to be more rich and productive since everyone has already become acquainted.  Next time we should head to the beach!

View all posts by samerharb