Posted by Fred Bteich on August 20, 2012 in Video Reports 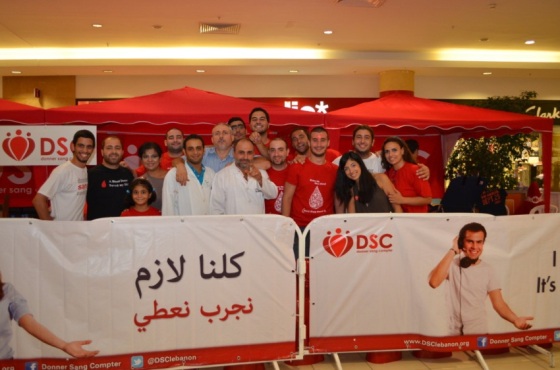 On the 12th of August, Donner Sang Compter organized its first blood drive in Lebanon, following news of blood shortages in local hospitals, reaching their lowest level in 15 years.

This occasion was particularly important, unifying the Lebanese people throughout this holy month of Ramadan, which coincides with the middle of a very hot summer, during which blood demands keep on increasing.

The event took place at the CITYMALL – Dora, and was attended by thousands of members, volunteers and fans of the NGO, as well as many celebrities such as MTV presenters Mohamad Kais and Carolina De Oliveira, all of whom responded to the call launched on the NGO’s very active Facebook page, in collaboration with the American University of Beirut’s Medical Center (AUBMC) Blood Bank.

The aim of the drive was to raise the public’s awareness regarding the dangers of blood shortages in the country and the importance of blood donations. This encouraged a big number of young men and women to donate blood, many of them were doing it for the first time. All you could see around were huge smiles, signs of relief and pride when a pint of blood was collected, and expressions of fear rapidly turning to joy after donating.

In around 5 hours, between 4 and 9pm, the blood bank staff managed to collect 92 blood bags, the totality of which will be donated to the Saint Jude – Children Cancer Center of Lebanon, helping more than 250 young patients dream of getting a tomorrow.

The whole drive took place in a gleeful atmosphere, during which flyers were distributed to the crowds, and small gift to the donors. The present people got also informed about the NGO’s upcoming events, the closest one being the Skybar fundraiser set for September the 3rd, hoping with it to revolutionize the blood donation system by introducing a brand new idea to the country, which could spare many problems being faced.

A metal fan, a blogger and a news/sports-obsessed medical student.

There was an error retrieving images from Instagram. An attempt will be remade in a few minutes.